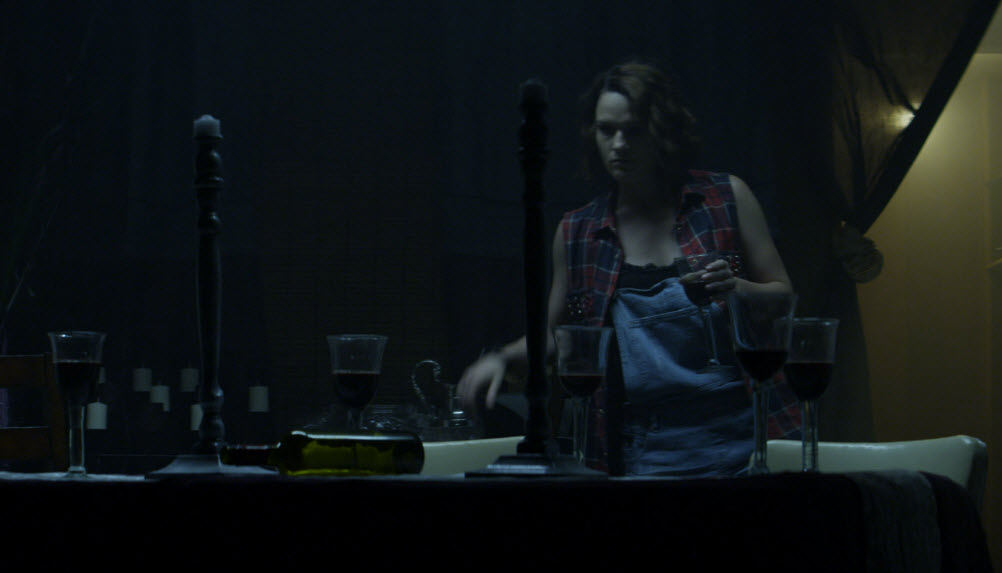 Welcome to The Scarehouse

Blood-chilling screams filled the cloying semi-darkness of the abandoned swimming pool room.  I quickly checked the levels and made sure I was rolling.  Behind me, an extension cord ran through the dank boiler room into the darkness of the adjacent chamber filled with body parts and broken glass.  Sounds of agony and rage twisted into one another, morphing into animal growls and snarls.  Jeremy glanced up from his clipboard and shot me a nervous look – 2 minutes left.  I nodded.  A thought suddenly struck me – what was I doing here?  Was this madness?  Would any of this really work?

Too late now – I had committed, and was deep in the bowels of The Scarehouse.

A Creepy Place to Work

When director Gavin Michael Booth told me how he would shoot his feature in old Bingo Hall/Knights of Columbus building in Windsor, I got excited.  It’s unusual for a composer to be on board this early on a film, and I saw a unique opportunity to record material for the score in the actual space where the film would be made.  The primary set location is in fact used as a haunted house during Halloween.  Now those same halls and rooms where the actors spoke their lines would resonate with sounds of objects I would find and record on location, giving the score a signature sound, and hopefully providing a deeper overall experience for the audience.

The House on Paper St.

By the time I arrived on set, the production had been going for a week and a half, and had switched to overnight shoots due to construction noise next door.  It was noon, and cast and crew were still fast asleep.  Perfect – I had a few hours to run around and explore, catalogue, and record stuff.

The building is vast and has many rooms and corridors, and I got lost a few times.  The main location was the old hall, now strewn with detritus, construction waste, and film gear.  Downstairs were a series of empty concrete rooms, long disused, dusty and dank.  Half the place had no lights; even with a flashlight, I found myself looking over my shoulder and getting the creeps when I stumbled into a “torture chamber” or found a remnant of the Halloween haunt.  Without air conditioning or even decent circulation, the humid heat of August summer air was stifling.  There was no hint of Hollywood glamour to be found – this was down and dirty filmmaking.  Already soaked in sweat, I unpacked my gear and started assembling my recording rig.

Over the next 5 hours, I found many sonic surprises waiting for me.  A metal security deposit unit with many rattling doors made a perfect snare.  Huge 35mm film reels from an old movie theater became my timpani.  The rest of the percussion was made up of an old muffler, some iron supports, and bits and pieces of metal tubing.  Downstairs I found an old claw foot bathtub which produced an array of sounds when played with mallets.  The big grip bin sounded like a war drum in the reverberant room, and the linked fence got really interesting once I strung it with heavy chain.

The assorted pieces of junk percussion

On the second night, now adjusting to the 5 p.m. to 5 a.m. call, I was able to work with the cast during setups.  I took leads Sarah Booth and Kimberly-Sue Murray down to the room where a pool had been, which had long since been boarded over.  We had to run electricity and lights, but the creepy location was the perfect backdrop for some experiments. I had them sing haunting, intertwining lines, and perform all sorts of strange vocalizations, from grunts and breaths to howls and screams.  I worked a furious pace that producer Jeremy Shell oversaw like an army general, giving me a strict 10 minutes at a time.   Once we wrapped, I thanked the girls for diving in so willingly.  They seemed energized by the process – apparently screaming your head off is a good way to work out the tensions of a grueling shoot and long nights on the set.

Get Me Out of Here!

On the train ride home I had some time to reflect on my crazy two days on set.  Everyone was pouring themselves into the project, and I admired everyone’s tenacity and grit to push through those long nights of intense production.  Now that I’m home and have seen bits and pieces of the footage coming together, I can’t wait to get started on the next stage of the film, and get to the chilling musical heart of The Scarehouse!

Here’s a demo of the score design elements in action.  There are no commercial samples or synths used – this track is comprised solely of material I recorded on set.