Adrian really understands how to extract what he needs from a director to understand the needs of the project, and then deliver exactly that. I knew going in that his product would be good, but it was the process that will draw me to want to work with him on every project I can.

Adrian has a wonderful knowledge of all aspects of film and composition. On top of that he understands the detailed work that goes into the filmmaking process. As a director working with Adrian is always easy and exciting. He has unique ability to unscramble a director’s fuzzy thoughts and turn them quite literally into beautiful music. Working with Adrian on 3 projects, I was always surprised by his ability to enhance and create tone to bring a project to its full potential. He is a great collaborator and wonderful person to have with you on a project.

Adrian’s score […] becomes the unnerving glue holding audiences’ attention and tension. His use of themes to represent two sides of the characters was beyond what I could have perceived in my imagination. Adrian’s grasp of storytelling made me better understand my own film and the best way to reveal key twists.

As for Adrian outside of his artistry he completed the project on the tightest of deadlines with out compromising quality or originality. His workflow is flawless and his humbleness […] are bar none.

Gavin Michael Booth, Director/Writer
The Scarehouse, Last Call, Are You My Mommy

Adrian is one of those rare creative professionals that excels at both creativity and professionalism. He has an encyclopedic knowledge of theory and reference materials, brings tremendous choices to the table, and has the uncanny ability to understand and amplify another person’s creative vison. You don’t have to speak music theory to Adrian to be able to communicate ideas and revisions, and he is amazing at taking and incorporating feedback without being precious about his original materials. He takes your good ideas and brings them to the next, next level, manifesting excellence that blows away expectation.

The score for any film is a character that is present in every scene. If you’re a director, you know that, and Adrian is the guy I want in every scene of every project I ever work on. His compositions elevated our film to a degree that even our production team did not believe was possible. I mean this wholeheartedly: our film would not have achieved its festival success, nor would it have received the great distributor it did, if it weren’t for Adrian Ellis. Hire him. He’ll save your movie.

Adrian Ellis was a joy to work with.  He understood precisely the moods I was trying to evoke (often better than I did!) and invariably supplied music that not only accomplished what I was asking for, but exceeded it.  My favourite part of the post-production process was fitting his music into scenes I had already viewed dozens of times, and finding a new emotional connection based on his work.  Highest recommendations!

Thank you very much for your outstanding composition! You put in a lot of hard work on it and we were thrilled to hear it all. The space version is absolutely my favourite. Your prose and musical creativity were certainly in overdrive here!

Adrian! I have tears in my eyes. Wonderful, wonderful work.

Jason Leaver, Director/Writer
Out With Dad

Adrian Ellis is a true professional, and understands the needs of filmmakers. He scored our upcoming indie feature, “The Uninvited” working against a tight deadline. The music he provided… has the whimsy of Danny Elfman, and a haunting quality that echoes the sound of Ennio Morricone.

Adrian rocks! He was sensitive to the film’s rhythms and enhanced the moods in all the right places. He has great intuition and needs little guidance. I thoroughly enjoyed the collaborative process with him. We will definitely work together again…

Dust of the Earth was an extremely difficult film to not only make, but to find the right music for. After going through a series of different composers and not finding the right sound for the film, Adrian came on board. Not only did he understand precisely what I was looking for (despite my vague descriptions) but he delivered with the utmost creativity. Since the film’s completion, we’ve been the official selection of seven film festivals world-wide and won Best Documentary at the First Glance film festival. I cannot tell you how many people have commented on how perfect the music was. The film would just have not been the same without Adrian’s talent and commitment.

I love working with Adrian… I’m definitely not sure where I would be right now without Adrian’s talent and supportiveness. He’s a mentor, a big brother and a good friend. He teaches me and makes following my passion that much more fun and exciting. I relate to him creatively and he always has wonderful ideas. He’s probably the best listener I know, not just because it’s his job as a musician and producer.

After auditioning several guitarists, a friend of mine referred me to Adrian to play the role of funk guitarist, Alex Weir, in a re-enactment of the Talking Heads film, “Stop Making Sense,” and I can say that had the part before even picking up his guitar. Throughout the five-month process of preparing for the show, Adrian was always very well-prepared and professional. He needed no guidance, for he was always a few steps ahead of all of us, and got on great with all the other members. I was extremely fortunate to work with him and can’t wait to do it again. 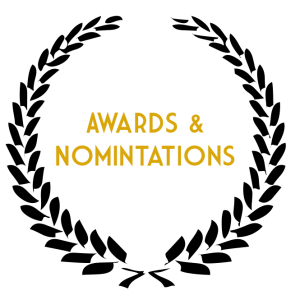 9th Indie Series Awards, January 2018
for Out With Dad

Outstanding Score in a Drama [Winner]

Indie Series Awards, February 2015
for Asset and Out With Dad

Indie Series Awards, April 2014
For the Musical Episode of Out With Dad, Season 3

Best Use of Music [Nominee]

Indie Series Awards, February 2011
for Out With Dad

Best Use of Music [Winner]

Indie Series Awards, February 2010
for Out With Dad

Get in touch and let me know what you're working on!

Send me a Message