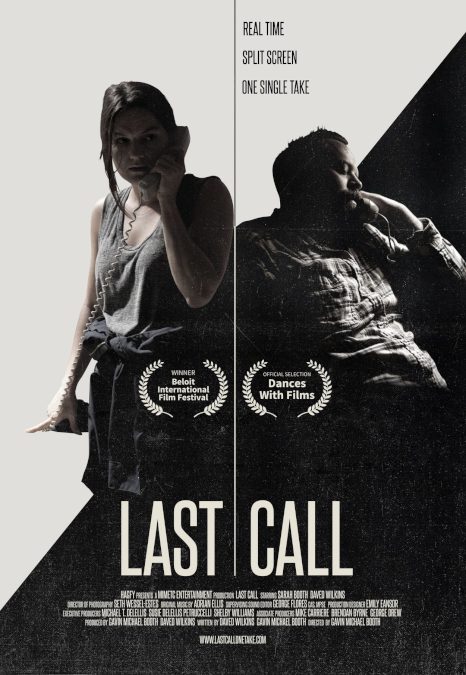 Shot in two true single takes, filmed simultaneously in two different parts of a city, Last Call, is a real time feature presented in split screen showcasing both ends of a wrong number phone call that has the potential to save a life.

The film received a 2 minute standing ovation during its West Coast premiere at Dances With Films in L.A.  The score was lauded by critics and viewers alike.  To match the approach and aesthetic of the film, a string quartet was recorded live, in front of an audience at the Chrysler Theater in Windsor ON and presented as a single take.

“The full house was moved by a score which soared… the feeling in the room was electric… Last Call should be seen because its unique storytelling is a selling point of its own. Powerful and unique, Last Call is at least that, but it just may live forever as a piece of cinema history.”  10/10 – Curt Wiser, OC Movie Reviews

“[the] conundrum of unified time and action but disunified space gives it a distinctly cinematic character that’s devastating in effect, reminding us that no matter our sins or circumstances, we’re all just human. Here is a true miracle of humanist filmmaking.” 9/10 – Nate Hood, Unseen Films